In 1982 Russam was founded as the first interim management provider, and in September, we will be turning 40. We will be hosting a unique networking event to celebrate. Please put 6 pm on Wednesday, 28th of September in your diary and email [email protected]. We will set up an Eventbrite booking link shortly and send a formal invitation to you.

We are so proud of our history, we are a family at Russam, and we are excited about the future, especially with all the new additions to the team to work alongside Ian, Cathy, Melissa and Jason in the leadership team. Our journey started in 1982 with our great friend Charles Russam. To say that Charles invented “Interim Management” is a temptation – which will be avoided as we are modest people – but that is the way we feel about it!

Our History – and our pioneering spirit

We are now in our 40th year. It all started with Guardian Management Services (where GMS comes from), a name change from Guardian Accounting Services, which had been formed by Accountancy Task Force Ltd several years before. Charles Russam became MD of Guardian Management Services in 1982 and shareholder. After leaving Beefeater Steakhouses, part of Whitbread where Charles had been No. 2 until departing in 1981, he did some “Consultancy” work as a temporary Accountant (he is a Chartered Accountant) and began to realise that there was probably a market for the same but at the top end of the market. He put the idea to the Accountancy Task Force, who, after careful discussion, decided to try it out – under Charles’ leadership – no salary – just a share of profits – a hard school. This was, in effect, the beginning of Russam GMS. It was also the only mainstream Interim Management Provider in the UK at that time.

To say that Charles Russam invented Interim Management is a temptation – which will be avoided as we are modest people – but that is the way we feel about it!   In 1982 Tanstead Ltd was formed by Charles as a vehicle to buy Guardian Management Services in Spring 1985. By 1986/7, Charles had four companies, with Tanstead Ltd appearing as the holding company but in effect, they were separately owned companies – Tanstead Associates Ltd (Search & Selection), Guardian Management Services Ltd (IT consultancy), GMS Consultancy Ltd (Executive Leasing called Interim Management post-1990) and Walker GMS Ltd (Business Planning Consultancy). The big company background of Charles Russam collided brutally with the harsh realities of the need to also have a sensitive feel for the dynamics of setting up and developing a small business, and all this very nearly put the company out of business in 1989 – the beginning of a cyclic economic downturn. Following this highly chastening experience, everything was focused on Interim Management, changing the name to Russam GMS Ltd in 1990 and “Cash is King” became a key company mantra. We know about big businesses. We know about small businesses. We understand the dynamics.

Charles was the Founder of the IMA – ATIES as it was known then. It emerged out of a lunch with Leonard Allen, then the Director of FRES, now REC. John Hird, MD of Albemarle, was then brought into the discussion, and the IMA was founded in 1987. Jason Atkinson became Chairman in 2010 (until 2014), and the membership is around 20.

In May 2014, Russam GMS announced a management buy-out and plans for growth with Jason Atkinson and Ian Joseph taking over the business. Charles Russam, who set up the business and served as Chairman, remained at the company as Founder and associate director for a number of years – working with clients and overseeing Russam business network activities, including running the NED group events. Richard Hutchinson, an existing NED on the Russam Board, was asked to act as Chairman for Russam GMS Ltd.

The last few years have seen us grow and innovate. We have several new businesses in our group, including Trustees Unlimited and Step-on-Board. We co-founded the WIL Group (Worldwide Interim Leadership) in 2013, and we are working on our B-Corporate status (Trustees Unlimited became a founding UK BCorp in 2015).

Pioneering remains in our blood. We continuously try our best to come up with innovative ideas that will help our clients to thrive. Some work, some don’t. But we still keep coming up with them. We hold Darwin’s quote close to our hearts –

“It is not the strongest of the species that survives, nor the most intelligent. It is the one most adaptable to change”.

We are so grateful to all our clients and to all the talented executives that we place in roles for your loyalty and friendship over the years. 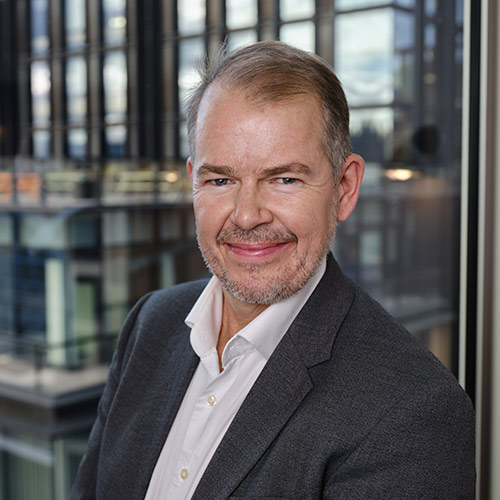